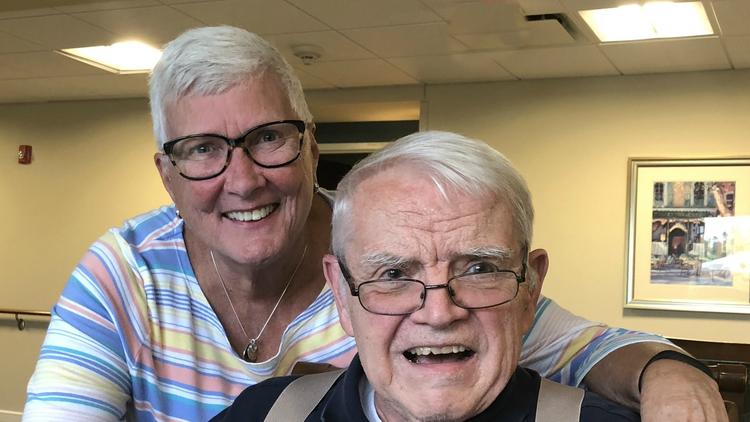 They benefitted from being in a Life Plan Community long before they ever thought they’d need to. Formerly known as a continuing care retirement community (CCRC), a Life Plan Community offers independent living, assisted living, memory support, and skilled care. Bonnie and Dave Adams knew that access to advanced levels of care if their health changed was something that they wanted before moving to Monarch Landing in Naperville. “We’d had struggles with our own parents as they aged. Dave’s parents especially had the mindset that they wanted to stay in their home forever, but they were lonely and cut off from other people. It was hard on them and hard on us,” said Bonnie. “Continuing care made sense to us. We could be independent and travel and stay active, and then if we needed it later, there’d be additional support available. Unfortunately, that turned out to be the case earlier than I’d thought.”

Dave was diagnosed with Alzheimer’s when he was 69. He was able to remain with Bonnie in their two-bedroom, two-bathroom independent living apartment at Monarch Landing for their first several years in the community, largely because of the Monarch Club. The initiative provides companionship and meaningful staffed activities for residents with challenges that might limit their socialization. The Monarch Club provided some relief for Bonnie’s caregiving responsibilities.

Dave first moved to The Springs four years ago as a respite guest. Bonnie explained that the couple had been on a cruise, during which time his disease took a dramatic turn for the worse, and he developed a serious case of influenza. “He was so sick. After a hospitalization, we returned home. I was exhausted, and Dave was exhausted. I knew I couldn’t do this by myself. I talked with Jenny Shea, Monarch Landing’s social worker. It’s hard for people who don’t live with this to understand the stress of taking care of someone with this disease. Jenny did understand. She suggested respite at The Springs for a few weeks to give me a chance to regroup. It was more for me than for Dave. I was losing it. I knew we needed to make some kind of longer-term change. He and I talked about it, and he said he was going to stay at The Springs. He understood that something needed to be done, and he made the decision,” said Bonnie.

It was a good decision. Bonnie said that while the Alzheimer’s is now at an advanced stage, Dave is happy and well-cared for. “The staff takes great pride in what they’re doing. They treat all of the residents with great respect and care,” she said. While he’s no longer able to participate in many of the programs, the staff makes sure to engage him with music, and he gets pleasure from watching all of the activities going on around him.

Because The Springs is under the same roof as Bonnie’s independent living apartment, it’s easy for her to visit Dave daily, while still being able to maintain her active lifestyle. “I am so busy. I can’t believe that I have to keep a calendar during my retirement,” she said. Bonnie has served on many committees, works out frequently in the fitness center, and plays cards.

The most important benefit of living at Monarch Landing, Bonnie said, is how close-knit the community is. “I didn’t understand how strong the sense of community is here, and how much support you get. It’s not a prescribed thing, but it’s just the way people are here.”