Helping Monarchs, One Butterfly at a Time 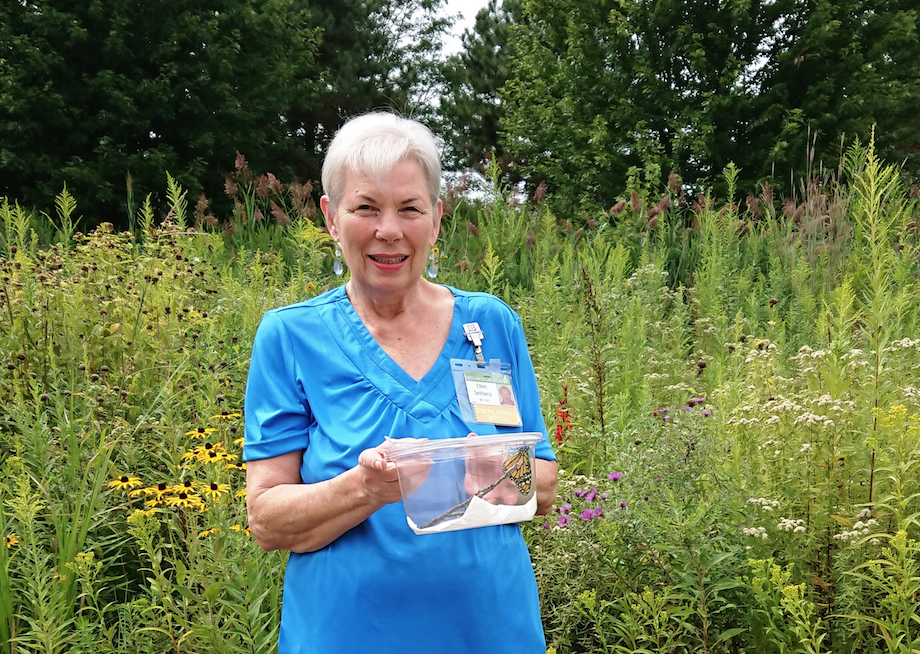 Ellen Sellberg is fascinated by the butterfly that shares the same name as her home, Monarch Landing. The senior living community boasts a 900-square foot prairie garden with plants that are magnets for butterflies, honeybees and birds. Each year, Ellen raises her own monarchs. Earlier this month, after weeks of watching and supporting the multiple transformations of the monarch from egg to butterfly, Ellen released her 2019 ‘pet project’.

Late each summer, Ellen searches for and retrieves monarch eggs from the areas around Monarch Landing. “When I find eggs on milkweed, I put them in containers and cover them with netting. The eggs take a week or so to hatch. At first, they’re miniature caterpillars; they’re tiny, like the size of an eyelash. I feed them milkweed leaves and they get bigger. At one point, they start devouring one or two leaves a day. It’s fascinating,” she said. They then form their chrysalis, which she said is another amazing metamorphism. “They go and attach themselves to the top of the container and form a ‘j.’ A green substance comes up from the bottom of the ‘j’ and covers them. They hang there for about two weeks, and they emerge as a fully formed monarch. Somehow Mother Nature takes all of these steps and puts them all together. You marvel at it every time you see it.”

Ellen usually looks for eggs in August. “The monarchs late in the summer are the ones that over several generations, fly to Mexico and spend the winter.” Each year, she said, she ‘raises’ as few as one, or as many as nine monarch butterflies which she then releases. “It makes me a little sad,” she admitted. “You keep watching it grow, keeping an eye on it and watching all the changes and then you let it go.”

Aside from being beautiful and captivating, monarch butterflies are pollinators as well as a source of food for insects and small animals. Unfortunately, their population has reportedly decreased by 90% over the past 30 years due to loss of habitat, climate change, and the prevalent use of pesticides. Ellen said that her process is motivated mainly as an environmental initiative. “I’ve always been a nature person. I grew up around every kind of pet imaginable.”

Ellen has many interests and pursuits in addition to monarchs. She is involved with Monarch Landing’s television crew and handbell choir and is a marketing ambassador. She’s also active in the state-of-the-art fitness center and participates in line dancing and tai chi. ”I’ve tried new things since we’ve lived here. There’s so much to do; if you haven’t done something before and you see something you’d like to try; you can do so. If you don’t like it, you try something else. It’s a wonderful community.”