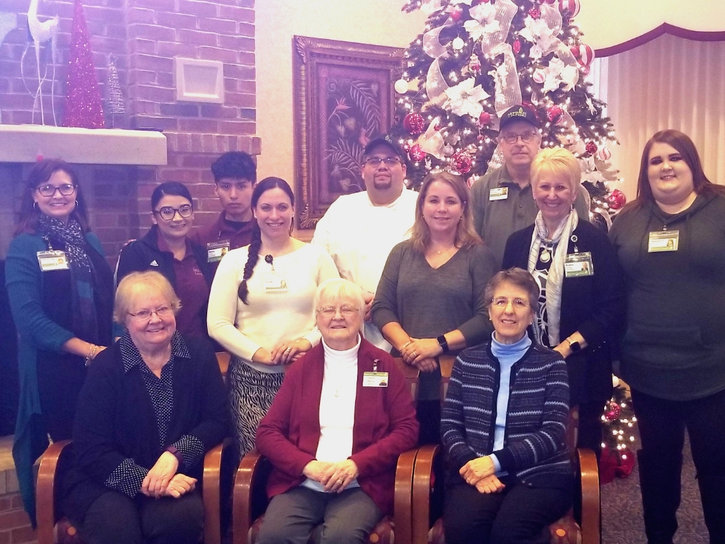 Kathy Schreiner, who moved to Monarch Landing last February, headed up this year’s drive. “It’s a way of thanking the employees for their enthusiasm and giving. We are not allowed to tip the staff, so this is our way of showing our appreciation,” she said. In addition to the staff that residents interact with on a daily basis, Kathy said, “There are a lot of people working behind the scenes, who we never get to see and thank in person.”

While donations to the fund are gratefully accepted all year, a special dedicated campaign takes place during a week in November. Kathy said that during that time this year, she shared a little background information of some of the employees with the residents. “It was great giving backstories on some of our staff.” For instance, she said, a young lady who worked as a dining room server during high school is now a CNA at The Springs Health and Rehabilitation Center at Monarch Landing. “She is working towards becoming a nurse and is very thankful for the opportunity to see rehab guests making improvements in their health every day. Residents were really touched to hear this type of story,” said Kathy. “This made the fundraising more fun and personal.”

At the end of the drive, donations were tallied up. “We have a list of all of the hourly employees, with the number of hours they worked during the year. We divided up the total by the number of hours they worked. Bonuses were added for employees who have been here more than five years, and more than ten years,” Kathy said. “We then had a check writing party. About ten of us wrote out individual checks, and the chairman of the Resident Advisory Council signed each one.”

Shortly before Christmas, a celebratory event was held during which time the department managers handed out checks to the employees. Kathy said that the smallest award was $25 gift cards to employees who hadn’t been at Monarch Landing very long or hadn’t logged substantial hours. The largest check was $775.